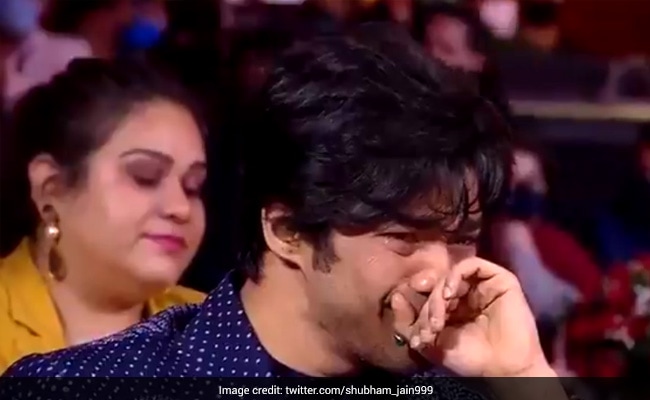 Babil broke down at the Filmfare Awards 2021 (courtesy Twitter)

Late actor Irrfan Khan’s son Babil attended the Filmfare Awards last month and had quite an emotional time as his father was remembered time and again in tribute speeches. In a viral video from the Filmfare Awards, Babil was seen crying inconsolably as Irrfan Khan was honoured at the awards ceremony. In an Instagram post recently, Irrfan Khan’s wife Sutapa Sikdar poured her heart out in a poem written in Hindi, titled “Mera Beta (my son).” Sutapa’s post appears to be a response to Babil’s emotional state at the Filmfare Awards: “Bada kadak launda hai woh… chhup chhup ke nahi sabke samne zor zor rota hai woh… bada kadak launda hai, baap ke yaadon ko samet ta hai nazuk ungliyon se… bikherata hai unhe khushbu ki tarah (He is a strong guy, he doesn’t cry secretly but does so loudly. He collects memories of his father with delicate fingers and disperses them like perfume).” Irrfan Khan died in April last year after a long battle with cancer.

The Filmfare Awards were held in Mumbai of March 27. Babil attended the award show in his father’s clothes. Here’s the viral video, in which Babil can be seen breaking down in tears: