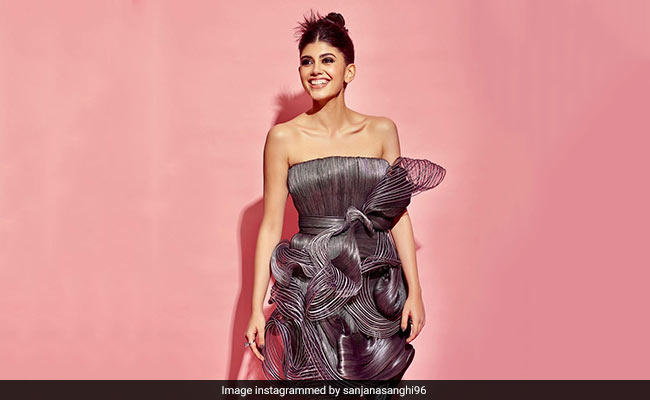 Actress Sanjana Sanghi is so cute, it’s almost unfair. Her latest Instagram Reels provides more proof of this. She shared a video from the red carpet of the Filmfare Awards that was held in Mumbai recently. Blowing kisses to the camera and twirling in the stylish grey ensemble, Sanjana looked every bit comfortable. Sharing the experience, she wrote, “That was a fun time goofing around on my first red carpet.” Sanjana’s fans seemed to have loved her “goofy” antics as they reacted with heart emojis.

She wore an outfit by designer Amit Aggarwal for the event. Sanjana styled the metallic structured skater dress with a high bun and minimal accessories. For the makeup, she went heavy on the eyes with a smoky look and kept the lips nude. The look was an instant hit with fans, who described her as “angelic” and “stunning.”

Sanjana also gave us a sneak peek into her fun side when she shared pictures of a photoshoot in an elevator. The actress appeared to be having a lot of fun and also added a cheeky caption to the image. It read, “Elevator mischief is not advised.”

Sanjana, who played a small role in Imtiaz Ali’s 2011 film Rockstar, made her debut as a lead opposite late actor Sushant Singh Rajput in the 2020 film Dil Bechara. Sanjana gained accolades for her performance as Kizie Basu, a young woman battling a terminal disease.

She was last seen in Guru Randhawa’s song Mehendi Wale Haath. Sanjana is currently working on Om: The Battle Within, directed by Kapil Verma. She is paired opposite Aditya Roy Kapur in the film.