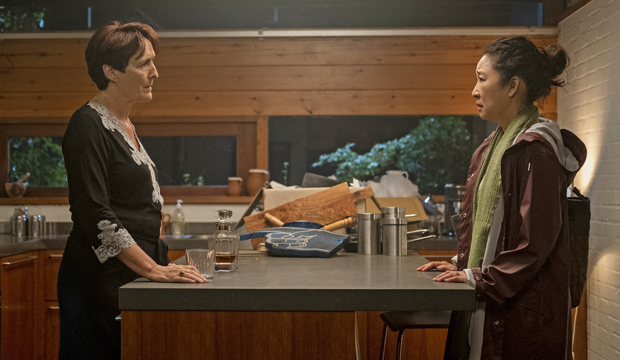 After scaring up a Best TV Drama Actress win for Sandra Oh (2019) and a nomination for Jodie Comer (2020) at the SAG Awards, “Killing Eve” is primed to reap its first bid for Best TV Drama Ensemble lineup this year. As of this writing, this BBC America hit is ranked sixth in our odds. Below I lay out why I think “Killing Eve” will slide into the top 5 and why you should as well.

Sometimes you just have to wait for the stars to align in your favor, as was the case for “Better Call Saul” and “The Americans” — which snatched their maiden noms together in 2019 — whose entry ticket might have been the absence of several heaty-hitters, including “Game of Thrones,” 2017’s champ “Stranger Things” and “The Crown.” “Killing Eve” could cash in on a similarly vacant field with four of last year’s nominees ineligible [“Thrones” having finished its run, “Stranger Things” and “The Handmaid’s Tale” sitting out this upcoming cycle, and “Big Little Lies’” fate still hanging in the balance]. Plus, it’s not like the show has gone unnoticed up until now; it’s already planted its seeds with Comer and Oh, and is just waiting for them to sprout.

With its set of outlandish but complex, nuanced characters, “Killing Eve” is an acting showcase, and no less so in season 3. The core trio of actresses — Comer, Oh and Fiona Shaw — impresses anew with layered, dynamic turns, which earned all three performers Emmy nominations earlier this year — Comer and Oh in lead; Shaw in supporting (bear in mind that the TV academy and SAG-AFTRA have membership overlap). The show also added to its already jam-packed ensemble cast with a batch of new faces, including Emmy and Tony Award nominee Harriet Walter as Villanelle’s (Comer) former trainer and mentor, and “Game of Thrones” alum Gemma Whelan as Carolyn’s (Shaw) daughter. Generally speaking: the bigger the cast, the better your chances are of making the cut.

As of now, our odds aren’t forecasting any individual noms for the cast, but it wouldn’t be the first time a show bagged an ensemble bid under such circumstances: On the drama side, “Big Little Lies” (2020), “The Americans” (2019), “Downton Abbey” (2017), “Game of Thrones” (2012) and “True Blood” (2010) all managed to pull it off this past decade. Besides, don’t be too quick to rule out at least Comer (7th place) and Oh (10th place) in the catch-all TV drama actress category since the former — who won the 2019 Best Drama Actress Emmy — is fresh off her maiden citation and repeat nominees are quite common at SAG, while the latter is a six-time nominee and four-time victor, who, as aforementioned, just triumphed for “Killing Eve” two years ago.

Comprising the top 5 for Best TV Drama Ensemble in our odds are incumbent “The Crown” in pole position, returning nominees “Ozark” and “Better Call Saul” in second and fourth places, respectively, two-time champ “This Is Us” in third and rookie contender “Lovecraft Country” in fifth. 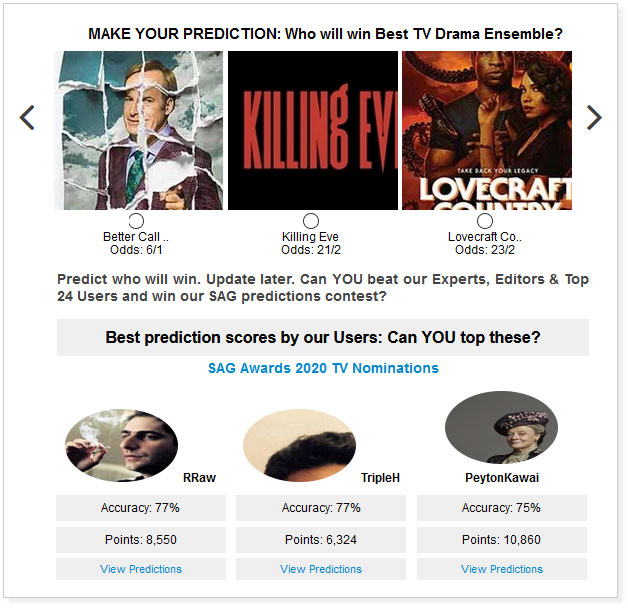