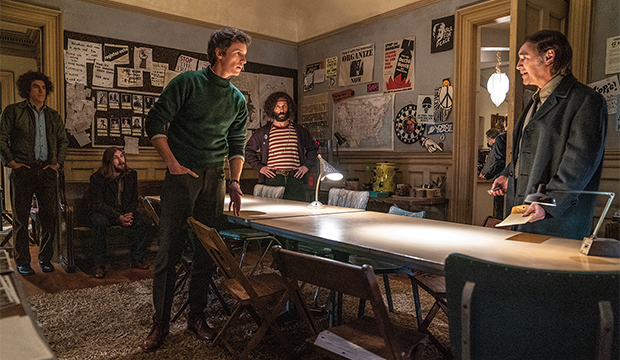 For months, it has felt like “Nomadland” was poised to cruise to a Best Picture win at the 2021 Oscars. But with voting set to end later today, the race for the top prize at the 93rd annual Academy Awards feels anything but sewn up: anecdotal evidence from Oscar voters and awards pundits suggests “Nomadland” might not have the universal academy support belied by its many precursors wins, including top honors from the Golden Globes, Critics Choice Awards, Producers Guild of America Awards, and BAFTA Awards. That’s left the door open for a potential upset in Best Picture, an outcome that seemed impossible just a few weeks ago.

As detailed by Gold Derby’s Daniel Montgomery last week, both “Promising Young Woman” and “Minari” have checked off a number of boxes that previous Best Picture winners had staked claim to as well. But of the group of contenders looking to push ahead of “Nomadland” as Oscar voting ends, “The Trial of the Chicago 7” might have the strongest case of historical precedent to upset the heavy favorite.

On Sunday, “The Trial of the Chicago 7” won in the drama category at the 2021 ACE Golden Eddie Awards, besting fellow Best Picture nominees “Nomadland” and “Sound of Metal” in the process. That victory, coupled with the best ensemble award “The Trial of the Chicago 7” won at the Screen Actors Guild Awards earlier this month, puts the Aaron Sorkin film in a select group. The only movies to ever win both of those specific awards are “The Lord of the Rings: The Return of the King,” “Crash,” “Slumdog Millionaire,” “Argo,” and “Parasite” — all of which went on to win Best Picture at the Oscars.

All told, “The Trial of the Chicago 7” received six Oscar nominations this year: Best Picture, Best Supporting Actor for Sacha Baron Cohen, Best Original Screenplay for Sorkin, Best Editing, Best Cinematography, and Best Song. Sorkin was snubbed in the Best Director category, presumably in favor of “Another Round” filmmaker Thomas Vinterberg. Sorkin was recognized in the Best Director categories, however, at both the Golden Globes and Directors Guild of America Awards. He lost at both ceremonies to “Nomadland” director Chloe Zhao.

Among Gold Derby experts, “The Trial of the Chicago 7” is running in second place in the Best Picture race behind “Nomadland.” Of the 26 experts, eight are predicting it will upset the Searchlight frontrunner on Sunday night.