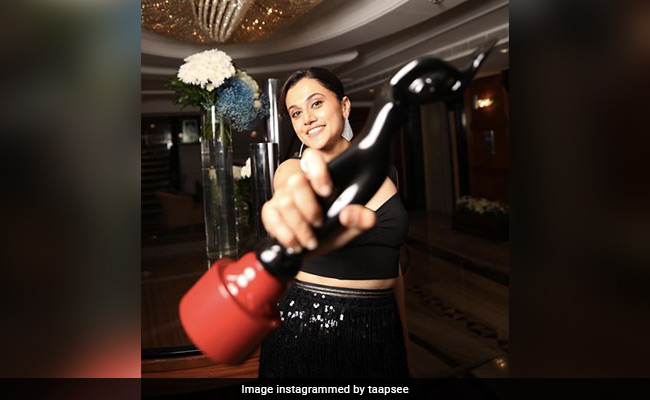 Taapsee Pannu, who had been winning back-to-back Filmfare Awards for the last two years, added another one to her collection on Wednesday night at the Filmfare OTT Awards. Taapsee won the Best Actress Award in a Web Original Film for her performance in Looop Lapeta. She shared a picture of all her Filmfare trophies and she wrote in her caption “2020-2021-2022. Last 3 years have been glorious.” In 2020, the actress won for her role in Saand Ki Aankh. The next year, she won the trophy for her performance in Thappad. Her film Looop Lapeta fetched Taapsee her third Filmfare trophy.

In Looop Lapeta, Taapsee Pannu co-starred with Tahir Raj Bhasin. The film was a Hindi adaptation of the 1998 German hit Run Lola Run.

The actress, thanking the makers of Looop Lapeta in a separate post, explained what made her pick the project. “Ok so this happened last night. Looop Lapeta was that film no one understood why I would want to do. Why would I want to touch a classic like Run Lola Run, why will I do another film where I’m running.” Taapsee has featured as an athlete in quite a few films including Rashmi Rocket, Soorma, Shabaash Mithu and Saand Ki Aankh. “I went into narration with an intent to say No and came out after giving an instant yes,” read an excerpt from her post.

Here’s another picture of the actress with her third Filmfare trophy. Read her post here:

Taapsee Pannu is best-known for her performances in critically acclaimed as well as hit films like Pink, Naam Shabana, Soorma, Mulk, Manmarziyaan and Thappad. She has also starred in films like Game Over, Badla, Saand Ki Aankh and Mission Mangal. The actress recently starred in the thrillers Blurr and Dobaaraa.

In the recent years, the actress was seen in Vinil Mathew’s Haseen Dillruba, starring Vikrant Massey and Rashmi Rocket, She also starred in Shabaash Mithu, based on the life of Mithali Raj.

Featured Video Of The Day