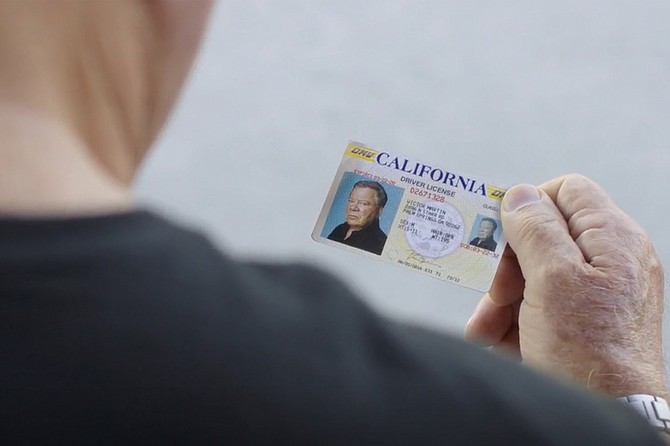 Senior Moment: the only thing worse for William Shatner is a revoked license to drive.

Confession is good for the soul: campy sci-fi has never been my bag, particularly when it comes bearing the stamp of network TV. Having never made it all the way through an episode of Star Trek, I bailed on the big screen bump-ups after Ricardo Montalban bit the dust. But my appreciation for William Shatner dates back to 1962, when he played a “social reformer” — a white supremecist weaving a campaign of hate through the deep South in Roger Corman’s The Intruder. (It was the only one of Corman’s independent productions that failed to turn a profit and one that I cannot recommend highly enough.) Shatner turned 90 last week — he doesn’t look a day over 65 — and I can’t think of a better way to celebrate the milestone than by sharing in his Senior Moment.

Victor Martin (Shatner) plans to live out his golden years with the love of his life, a vintage silver Porsche. The retired, never married NASA test pilot calls Palm Springs home, and as submitted, it’s a sleepy desert resort community where everybody knows everybody. (Even if it’s not true, in order to help grease a path through some of the film’s more fortuitous encounters, it’s best we go with it.) On a good day, that could lead us to supporting characters like Pablo Torres (Carlos Miranda), the sweet-tempered guy in the cherry Chevy Impala next to Victor, waiting for the light to change while deciding whether or not to accept the crazy old man’s invitation to a game of chicken. Spying a police car up the road keeps Pablo’s foot on the brake, while Victor’s blast off burns a strip of rubber into the asphalt. It’s no surprise that the local traffic cop and Victor are on a first-name basis. She lets him off with a warning, followed by a bit of advice: there’s a new Judge in town, and she’s gunning for speed-addicted seniors driving souped-up sardine cans.

One can’t really call Caroline’s (Jean Smart) first encounter with Victor a “meet cute.” By then, director Giorgio Serafini and his writers have done an ace job of drawing their characters together; they’re unknowingly sharing space in close, ever-narrowing proximity. She didn’t realize it at the time, but the Porsche doing donuts beneath her window, the silver one that came close to causing a fatality, was being piloted by the man whom she was courting. You know, the same schmuck who, as a result of the incident, had his car impounded and license temporarily revoked.

His cry of outrage echoes throughout the Coachella Valley: “Victor Martin does not take the bus! Not now, not ever!” To spoiled Victor, public transportation is for losers, old people, and, unbeknownst to him at the time, Caroline. She isn’t the first woman we’ve seen draw Victor’s eye. There’s Kristen (Katrina Bowden), the swimsuit model who poses opposite his Porsche on the cover of Sweet Ride magazine. Shatner sweats charm, so much so that he persuades her to join him for a few drinks with his friends. When asked point blank why a man his age still chases younger women, he backs down a bit with, “I don’t want to come off as a chauvinist pig.” “Pigs are very smart,” is her pointed reply. Given one’s generally low expectations of material such as this, both Caroline and Kristen are surprisingly well-written characters. The strength of these two women is somewhat overshadowed by the more lecherous exchanges Victor and pal Sal (Christopher Lloyd) share over Kristen and her model friends.

Walking does have its advantages. “I must have driven past this place a hundred times,” Victor tells Caroline after stumbling into her Cuckoo Cafe. He’s able to help solve the mystery behind the bird in the broken clock, but when it comes to getting his license back, he needs the help of Rock Kendall (Don McManus), a huckster who doesn’t so much cheat as he teaches Victor how to best the system at its own game. Even Pablo returns to act as Victor’s driver. Then there’s the mysterious Diego Lozano (Esai Morales), whose relation to Caroline gives the film a touch of mystery that, unless it’s your first time at the movies, shouldn’t pose much of a puzzle.

It would be thoughtless to write this off as entirely Shatner’s show. But his ability to make everything that comes out of him sound unrehearsed and effortless makes him a delight to watch. Ditto Lloyd, whose presence in the courtroom not only provides backstory, but also gives one a sense of just how important a friend he has in Victor. And other than not coming clean about her relationship to Diego, Smart’s Caroline provides Victor with just cause to swap out his love affair with a four wheel roadster for a woman capable of handling his curves. ★★★

Boogie — Each generation has a defining high school basketball picture to call its own (One on One, Love and Basketball, Above the Rim, etc.). The dialogue may coarsen, the off-court violence intensify, and the ethnicity of its lead may fluctuate over time, but the events outlined in the narrative basically remain the same, right down to the differing parents, compulsory teen love angle, and/or championship games that closes each picture. Not having seen the poster, at what point do we know this is a coming of age story? Just before Boogie’s (Taylor Takahashi) English teacher assigns Catcher in the Rye, he informs his class that each student is currently inhabiting their own coming-of-age story. But as far as temperamental Boogie and his contemporaries can tell, Asians are second-class citizens living in a country steeped in resentment. He seconds the rancor of his parent’s generation: his people have earned their place in the kitchen or behind an accountant’s desk, but when it comes to team sports, they’re the last to be picked. Boogie stands above it all. Voted best in-city, it’s a wonder he can dribble with a chip the size of the Great Wall teetering on his shoulder. As always, it’s the differences that keep us watching: for once, the reconciliatory romance casts the star athlete, not the head cheerleader, in the role of virgin. And while Boogie’s parents are at constant loggerheads when it comes to securing a scholarship, watching them spar is far more engaging than anything that takes place on the court. But after a series of fits and starts, the tipping point was reached with a romantic rivalry that caused first time writer-director Eddie Huang to take his eye off the ball. 2021 — S.M. ★★

Nobody — Everything moves so fast at the outset. In a little over a minute, two weeks of Hutch’s (Bob Odenkirk) life are condensed with thudding rapidity. The problem with Nobody is that our eponymous nebbish was once a notorious somebody: a retired mob “auditor” — a high-paid contract killer who traded in his violent ways for a quiet suburban life with his family. (Hutch is at his best when breaking his enemies down with exposition.) When his home is ransacked by a pair of punks, one of whom draws a bead on his son, Hutch appears to go full wimp, allowing the boy to take a punch knowing full well that his assailant’s revolver had an empty chamber. As written, it’s hard to swallow Hutch as either a good family man or multi-layered mafioso when a character such as his bleeds stereotypes. In spirit, the film’s high point — a dragged-out knock-down-drag-out that takes place aboard a bus — owes much to John Carpenter’s amusingly unremitting bare-knuckle brawl in They Live. And if the old adage about “the meaner the villain, the better the film” is true, Russian gangster Yubian’s (Aleksey Serebryakov) one-take entrance, that follows him from back seat to dance floor, heralded a sexy beast. We are instead served another helping of reheated sociopath: connected, funded, and otherwise unexceptional. Ilya Naishuller directs. 2021. — S.M. ★

The Father — The 6 Oscar nominations confirmed my worst fears. Congratulations to Sir Anthony Hopkins for finally checking “Alzheimer’s Patient” off his acting bucket list. Hello, what’s this? It was directed by the same guy who wrote the play, Florian Zeller. You know what that means? Characters may come and go, but once the credits end with Anne (Olivia Colman) entering her father Anthony’s (Anthony Hopkins) apartment, the audience will remain trapped inside the canned theatre. There is one new wrinkle to keep it interesting, at least for the first half: the drama plays out from inside Anthony’s mind. Caught in the agony of dementia, he’s at best a sort of unreliable narrator. We’re never quite sure what version of the truth, if there is such a thing, to rely on. Two actors inhabit one character while some performers assume dual roles. When one character leaves the room, you never know who will return in their place. Move past the gimmick and superb cast and what’s left? They just as easily could have named it Still Alice, the Iron Lady, Stood Away from Her, Never Singing for her Father. With: Rufus Sewell and Imogen Poots. 2020. — S.M. ★

Donny’s Bar Mitzvah — A hand enters the frame to select a tape from the stacks. Strategically shelved label-out next to “Donny’s Party” — the cassette that has transcribed on it in rapidly deteriorating magnetic particles the 1998 reception at hand — is a VHS tape with “Barney Porn” scrawled across its spine. This level of wit sets the watermark for the uniformly infantile, sex obsessed assemblage of unstructured blackout gags to follow. Hollywood red carpet-themed Bar/t Mitzvah bashes have long become a celebratory staple in the Jewish community. If the goal was to lampoon a videographer’s craftsmanship, well, unless it belongs to one of Spielberg’s kids, what Bar Mitzvah tape offers three-camera coverage, complete with aerial shots and reverse angles? If nothing else, Jonathan Kaufman, making his inauspicious debut as writer-producer-director, got the 4:3 aspect ratio right. Other than stating the obvious — the post-reading-from-the-Torah shindig is thrown more to impress adults than 13-year-olds — what lies ahead amounts to little more that wringing laughs through shock and disgust. Even the vilest subject matter can be made funny when placed in the proper hands. On Kaufman’s soul-crushing watch, gags involving alcoholism, child abuse, Bubby snorting rails, children playing with dildos, and Donny’s dream girl succumbing to a riot hose blast of projectile vomit don’t amuse, they offend. But wait, there’s more. 2020 was a deplorably counter-productive year for Danny Trejo (The Last Exorcist, Lumpia with a Vengeance, Death Rider in the House of Vampires). 2021 finds the star at his self-parodic nadir, a one-joke gag dressed in drag. Things can only go up from here… we hope. 2021. — S.M. ●