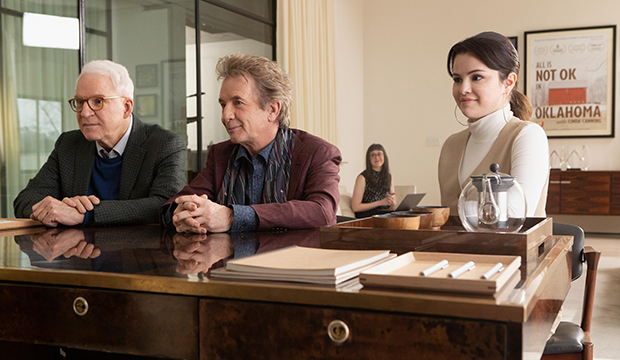 Comedy legends Steve Martin and Martin Short have been friends for over 35 years, so their instant chemistry on screen in Hulu’s freshman comedy series “Only Murders in the Building” surprised nobody. Introducing Selena Gomez as their ‘third amigo’ on the series, though, proved to be a stroke of genius for this hilarious send-up of true crime podcasts. Going toe-to-toe with Martin and Short, Gomez anchors their antics with a mysterious and charismatic performance.

Set in an envy-inducing New York apartment building on the Upper West Side, “Only Murders in the Building” draws Martin, Short, and Gomez’s three mystery podcast enthusiasts together when one of their fellow tenants is killed. What begins as an amateur sleuth tale gets increasingly complicated when we learn that Gomez’s Mabel knows a lot more about the victim than she initially let on. Gomez navigates the series’ shifting comedic and emotional beats effortlessly, at once endearing and acerbic.

SEE ‘Only Murders in the Building’ reviews: Steve Martin’s Hulu series is a ‘sly’ parody of true-crime mysteries

Critics were immediately drawn to Gomez’s turn on the show. Melanie McFarland (Salon) wrote, “‘Only Murders in the Building’ capitalizes on her strength and dramatic versatility, placing her on equal billing with comedy legends Steve Martin and Martin Short – and better still, equal footing.” Judy Berman (Time) called Gomez “sparkling,” and Alan Sepinwall (Rolling Stone) raved that “her comic deadpan feels sharpened to a knife’s edge, and she’s an effective emotional fulcrum for the story.”

In the Comedy Actress race at Screen Actors Guild Awards, Gomez sits in sixth place in our current combined odds. She trails recent Emmy-winners Jean Smart (“Hacks”) and Hannah Waddingham (“Ted Lasso”), Elle Fanning (“The Great”), SAG favorite Sandra Oh (“The Chair”) and Issa Rae for the final season of “Insecure,” who we predict will be the five nominees.

We shouldn’t underestimate Gomez, though, not only on the merits of her performance, but also because we anticipate “Only Murders in the Building” to perform well overall. The series is currently third in our predictions for Comedy Ensemble, trailing Emmy champs “Ted Lasso” and “Hacks.” We also expect Martin and Short will both earn nominations in Comedy Actor, only trailing Jason Sudeikis. If SAG voters have watched the show and will vote to nominate it in these three spots, it seems hard to believe that they’ll pass over Gomez’s name.

In fact, Gomez seems exactly like the type of performer that SAG recognizes in this category. Yes, Comedy Actress has rewarded a string of veteran actresses from Catherine O’Hara (“Schitt’s Creek”) to Julia Louis-Dreyfus (“Veep”) and even Betty White (“Hot in Cleveland”), but they just as often champion rising stars: Uzo Aduba won twice during the early years of “Orange Is the New Black,” Ellie Kemper (“Unbreakable Kimmy Schmidt”) and Alison Brie (“GLOW”) landed multiple nominations, and Rachel Brosnahan (“The Marvelous Mrs. Maisel”) and Phoebe Waller-Bridge (“Fleabag”) both won once, too. Gomez has the balance of established name recognition and popular breakout role to land her first SAG nomination.