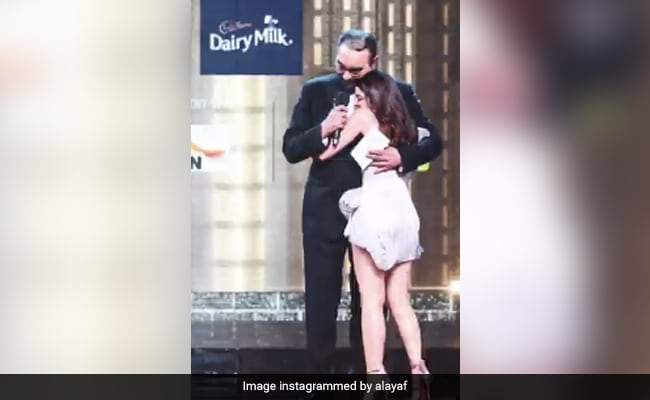 Alaya Furniturewalla and Kabir Bedi in a still from the video.(Image courtesy: alayaf)

Looks like Alaya Furnitirewalla is still basking in the success of her recent Filmfare Award win. Alaya who is the daughter of actress Pooja Bedi and grand-daughter of senior actor Kabir Bedi, received the Filmfare Award in the category of best debut actress this year for her work in the film Jawaani Jaaneman. Alaya Furniturewalla, on Saturday, shared a video from the 66th Filmfare Award function night on Instagram. The video features the young actress receiving her first Filmfare Award from her “dearest nana” Kabir Bedi. Sharing the video on Instagram, Alaya wrote: “You know how they say the best moments in your life are ‘yet to come’? Well, I say it’s going to be hard to beat this one. Getting the Filmfare Award for Best Debut Actor (Female) from my dearest Nana Kabir Bedi.”

This isn’t the first time that Alaya has expressed her happiness over winning the black lady on social media. Alaya Furniturewalla had earlier last month shared a picture of herself with her Filmfare Award trophy on Instagram soon after winning it. She complemented the post with a long caption sharing how thrilled she is to receive the award. “SHE’S MINE!!!!! Best Debut Female!! I’m smiling from ear to ear!!! So, so, so grateful! THANK YOU THANK YOU THANK YOU,” she wrote in the caption of the post.

As mentioned earlier, Alaya received the award for her acting in the film Jawaani Jaaneman. Directed by Nitin Kakkar, the film was released in early 2020. Besides Alaya Furniturewalla, the film also stars Saif Ali Khan and Tabu in pivotal roles.

Alaya recently won hearts as she featured in a new music videoAaj Sajeya. The song that was released on March 30 is still being loved by fans. In the music video which has been sung and composed by Goldie Behl, Alaya Furniturewalla plays a new-age bride.

Check out the song here: