If you took all the gun play out of “Without Remorse,” the new Michael B. Jordan thriller on Amazon Prime Video, the movie would only be about 10 minutes long. The Tom Clancy adaptation is a bullet ballet that plays like a throwback to 80s matinee action movies.

When we first meet John Clark (Jordan) he’s leading an elite team of US Navy SEALs on a dangerous top-secret mission in Syria to liberate a CIA operative taken hostage by ex-Russian military forces.

Cut to three months later. Back in the United States, the quiet life Clark and his pregnant wife Pam (Lauren London) have created for themselves is shattered by Russian assassins who invade their home. Looking for revenge, the Russian hit team kill Pam before Clark is able to off three of the four hitmen. The fourth gunman fires back, leaving Clark for dead, riddled with bullets.

Not satisfied with the official way of doing things, Clark becomes a one-man army, seeking revenge and answers. He is the very definition of a man you don’t want to mess with. He’s a killing machine, especially when you take away the only thing he had to live for. He tracks down a Russian diplomat he thinks is responsible for the murder of his wife and coerces information out of him in a spectacular and completely illegal way.

“They brought the war to my house,” he says. “The contract is broken. They’re going to play by my rules now.”

His act of retribution lands him in prison but he’s able to trade the sensitive information he garnered in his one-man mission for a second chance at revenge. This time with the cooperation of the CIA and military.

One secretive flight to Russia later, cue the carnage and conspiracy.

“Without Remorse” is an extremely violent movie with more bullets than brains.

Director Stefano Sollima stages intense action scenes and isn’t afraid to let the bodies fall where they may. Unfortunately, it’s in the handling of the other stuff, the intrigue, that the movie comes up short. In between bullet blasts a conspiracy slowly comes into focus, but it is never developed.

Buried beneath an ever-increasing body count is the broader and more interesting picture of governmental tampering with world politics. Countries need outside enemies, it is suggested, or people will turn on their neighbors looking for someone to hate. It’s a timely message, a bit of debatable ideology, that could have been the underpinning for a rich subplot. Instead, “Without Remorse” is a standard issue shoot ‘em up.

Jordan brings charisma and physicality to the role, but is saddled with Steven Seagal-level dialogue. “Death follows me around,” he says in a line that could be from any number of direct-to-DVD action films from the last thirty years.

“Without Remorse” starts off with a bang—many of them in fact—but ends as a regression to cold war paranoia fuelled by bullets and brawn.

“The Marksman,” a new Liam Neeson action pic now on VOD, doesn’t aim quite high enough to hit the mark.

Neeson is Jim Hanson, a former Marine, now living on the Arizona border with Mexico. He’s fond of a drink and calling the border patrol when he sees migrants entering the country on foot.

His life changes when he gets up close-and-personal with a woman (Teresa Ruiz) and her son Miguel (Jacob Perez) who are on the lam from a drug cartel. Despite his police officer daughter’s (Katheryn Winnick) warnings to stay put, he hits the road, going head-to-head with Mauricio (Juan Pablo Raba), a blood thirsty cartel soldier with a personal score to settle. Why does Jim do it?

Director Robert Lorenz made his bones working as an assistant or first unit director for Clint Eastwood and it shows. “The Markman” feels like Eastwood Lite; a grizzled tough guy with a special set of skills thriller that sat on Clint’s slush pile for years. All that’s missing is a cool take-away quote like, “Get off my lawn.”

Neeson has the gravitas to make you believe he doesn’t scare easily, but the story feels inert, like a series of competently staged set pieces held together by the leading actor’s presence and not much else. What’s missing is forward momentum.

“The Marksman” is a road movie but one that takes the meandering back roads to get where it is going.

“Golden Arm,” now on VOD, isn’t a Gen X remake of Otto Preminger’s gritty, Academy Award nominated drug drama “The Man with the Golden Arm” or a remake of “Over the Top” minus Sylvester Stallone.

Instead, it’s a laugh-out-loud charmer about self-discovery and female friendship set against a backdrop of women’s arm wrestling.

Comedian Mary Holland is Melanie, a recently divorced owner-operator of a failing bakery. Her customers are rude, she’s going broke and she really needs a break.

“We need a ringer,” Danny says.

When it turns out that years of running the bakery by herself has given Melanie natural arm strength, Danny asks her to sub in for her at the tournament.

“I’m gonna have you fill in for me at the nationals,” she says.

Melanie doesn’t have the killer instinct of an athlete, but the fifteen-thousand-dollar prize money would solve many of her problems so she agrees. But first they must train under the tutelage of legendary arm-wrestling coach, Big Sexy (former “Glee” star and fifteen-time world arm wrestling champion Dot-Marie Jones).

“Golden Arm” is a feel-good sports movie that, like all good sports movies, it isn’t really about the sport. There’s loads of time spent talking about arm wrestling and we learn that it takes to win—“Be quick and explosive, you want to get the jump,” and that it takes eight pounds of pressure to break a humerus, the bone that runs from the shoulder to the elbow—and, of course, there is a showdown at the film’s climax, but this is a movie about a personal journey, female friendship and empowerment.

It’s also laugh out loud funny, sometimes vulgar, sometimes sweet. Sodaro is like a female Jack Black, a brash performer who takes chances and can deliver a line. Balancing her out is Holland, whose arc extends from meek-and-mild to badass in ninety minutes. They are the heart and soul of the movie and, with a colourful supporting cast, provide enough laughs and emotion to make “Golden Arm” a winner.

Cage plays a mysterious drifter who finds himself stranded in a small town with a dark history. Picked up by a tow truck driver after running over a spike strip on a stretch of lonesome highway, he’s told it’ll cost $1000 to repair his car. Trouble is, the mechanic doesn’t take credit cards and there isn’t an ATM in sight. With no way of paying, a local businessman makes him an offer. Spend the night cleaning Willy’s Wonderland, a kid’s restaurant that’s been closed for years, and the next morning the car will be fixed and returned, no questions asked.

Turns out the drifter is the latest in a series of folks sent to the abandoned building as human sacrifices to mollify the evil, restless spirits that live within. You know those paintings with the eyes that follow you as you walk by? Imagine those, except they’re not paintings, but creepy kid’s mascots with cute names like Ozzie Ostrich and Tito Turtle. At first, he notices their eyes following him as he wipes down the banquets. Soon though, it becomes clear Ozzie and the others have murder on their minds.

Add a group of dispensable teenagers to the cauldron and you have a strange mix-and-match of an 80s slasher flick and a kid’s birthday party gone terribly wrong.

“Willy’s Wonderland” continues the saga of Cage’s baffling career choices, but is a bit of fun.

The idea of children’s mascots possessed by the spirits of serial killers is pure Midnight Madness and Cage adds to the movie’s unhinged playfulness with a wordless, singular performance that could only have emerged from an Oscar winner intent on letting his freak flag fly. He plays pinball, glowers, does an orgasmic dance, chugs innumerable cans of soda and dispatches mascots with ruthless efficiency. It is the kind of work we’ve come to expect from Cage and the kind of performance that only he can deliver.

It won’t be for everyone, but it fits in perfectly in a movie featuring a cuddly mascot growling, “I’m gonna feast on your face!” 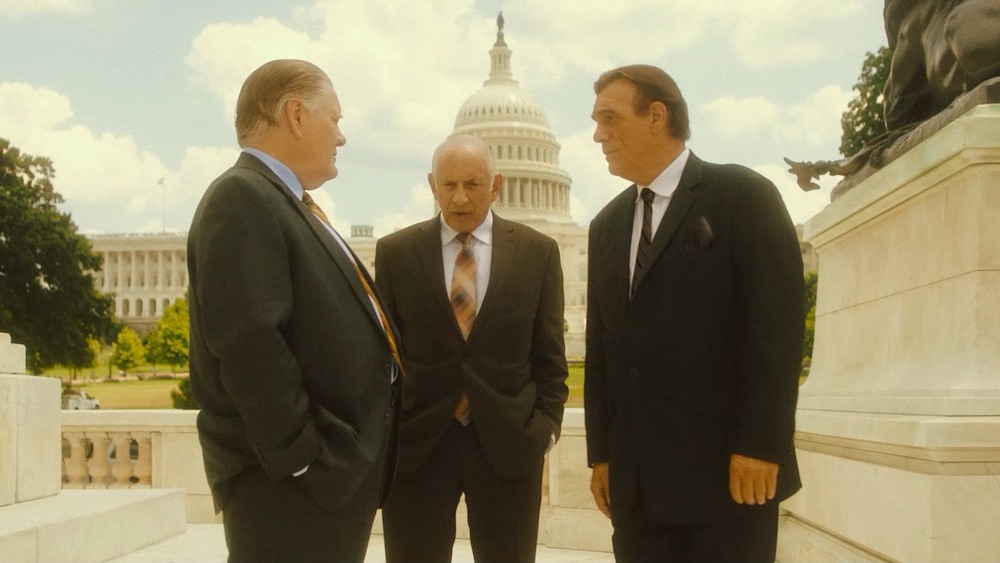 De Longpre 2 years ago
Movie reviews: ‘Nobody’ is a violent, funny mix of ‘John Wick’ and ‘Home Alone’