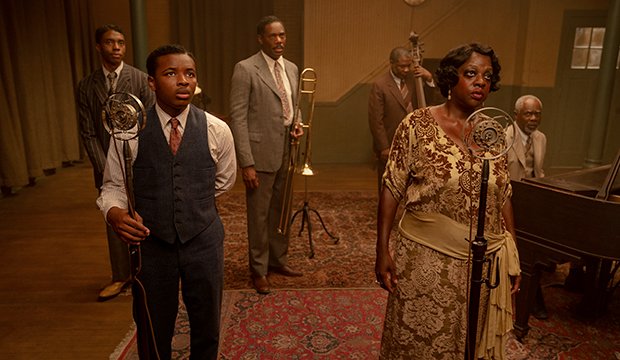 At the moment, one film is predicted to win multiple Screen Actors Guild Awards: “Ma Rainey’s Black Bottom.” Viola Davis is comfortably out front in our odds to take the lead actress award, while the late Chadwick Boseman recently pulled ahead of Anthony Hopkins (“The Father”) in lead actor. And if things go very well for the Netflix drama, it could also nab the top ensemble honor, which would make it the fifth film to win a record three SAG Awards.

Should it pull off the hat trick, “Ma Rainey” would join “American Beauty” (1999), “Chicago” (2002), “The Help” (2011) — another Davis flick — and “Three Billboards Outside Ebbing, Missouri” (2017) as three-time winners. All four films scored the ensemble prize in addition to two individual wins. “American Beauty” won for leads Kevin Spacey and Annette Bening; “Chicago” swept the actress categories for Renee Zellweger and Catherine Zeta-Jones, as did “The Help” for Davis and Octavia Spencer; and “Three Billboards” collected lead and supporting statuettes for Frances McDormand and Sam Rockwell, respectively.

“Ma Rainey” is currently in third place in the film ensemble odds, trailing the sprawling cast of “The Trial of the Chicago 7” and the stars of another adaptation of a play, “One Night in Miami” (“Mank” and “Da 5 Bloods” round out the top five). While the “Ma Rainey” cast has earned great notices — with Glynn Turman winning Best Supporting Actor from the Los Angeles Film Critics Association (Boseman won lead and Davis was runner-up) — ensemble is arguably the toughest of the three categories for the film to win. The category usually favors large ensembles, crowd-pleasing hits and/or heavy Oscar front-runners, none of which really fits “Ma Rainey” (it’s currently in fourth in our Best Picture Oscar odds).

If “Ma Rainey” can seize these three victories, it’d also put Davis and Boseman in a notable group: They’d be the 19th and 20th actors to win the ensemble award a record two times. 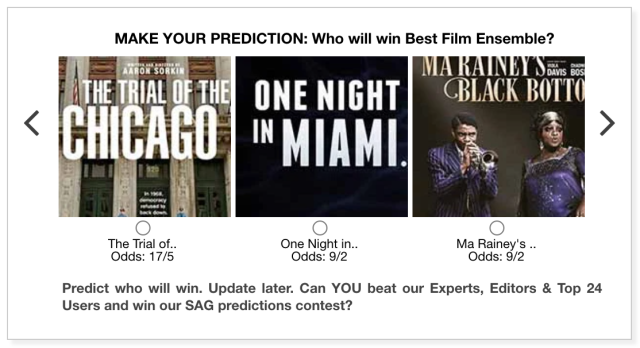