Although she was slated to present at the end of the Oscars last Sunday, Lady Gaga was MIA at the ceremony for most of the night. Instead, she spent it showing off her cream tulle dress and Tiffany’s diamonds at Elton John’s Aids Foundation Oscars viewing party, which was right next door. But since the Grammys are part of her pre-acting roots, she hit the red carpet early and let me tell you, Lady Gaga’s 2022 Grammys look did not disappoint.

This year, Lady Gaga is nominated alongside her musical partner and legend Tony Bennett. Together, they are nominated for five awards, including album of the year for their second album, Love for Sale. Their first album, Cheek to Cheek took home the award in 2015, so it’s safe to say they’re on the shortlist for winning again.

On the red carpet, Gaga wore a stunning custom Emporio Armani black and white gown, pulling inspiration from the classic Old Hollywood red carpet attire. The dress features a fitted black body that just graces the hemline of the red carpet while the white train drapes off of her shoulder and puddles onto the side of the floor. The dress is unique and pulled attention from the other Gen-Z and Y2K-inspired red carpet looks of the evening. 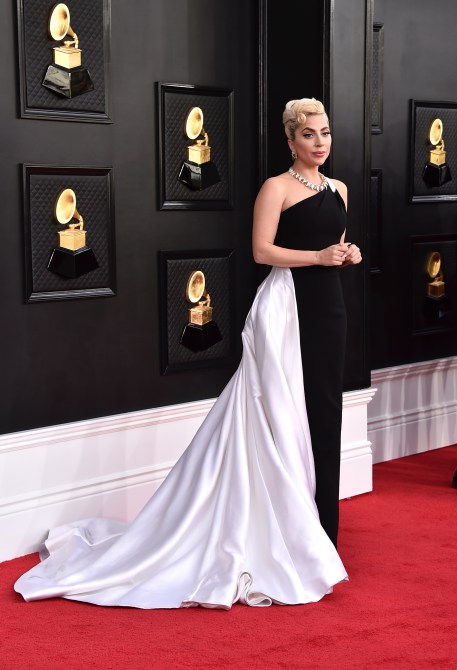 Of course, she was completely drenched in Tiffany & Co. diamonds. The chunky feathered diamond necklace and huge coordinating earrings completely elevated the entire look. Gaga has been working with the iconic brand since 2017, when they featured her in a Super Bowl ad. Ever since, they’ve been collaborating on and off the red carpet. She may not be rocking the “priceless” 128-carat Tiffany’s diamond she wore to the 2019 Oscars, but her jewels tonight were just as blinding.

For hair and makeup, Gaga decided to double down on the Old Hollywood glam. Her hair was coiffed in a curled up-do on top of her head. For makeup, Gaga wore a neutral lip with a subtle cat eye, fluffy lashes and a boldly defined brow. The ultra-classic and sophisticated feel of her look shows that Gaga has come a long way since her meat dress days on the red carpet. The overall style of her look, beautifully compliments her music partnership with Tony Bennett—a symbol of true talent and class in the industry.

Earlier last year Bennett announced that he’d retire from performing at the age of 95, so it’s not set in stone that he’ll join Gaga on stage for her performance this year. Whatever happens, it’s sure to be a show-stopping moment in a way that only Gaga can shell out. She’s been trending online since last weekend, when she shared a sweet moment with showbiz legend Liza Minnelli, so fingers crossed we’ll get some more heart warming meme-worthy moments tonight.

The combination of Lady Gaga’s music and movie career has resulted in a new era of dramatic fashion choices. By finding inspiration in the past, Lady Gaga is once again setting the red carpet trends for the future.