NUR-SULTAN – The Kazakh Nomad Stunts director Zhaidarbek Kunguzhinov and Nomad Stunts team won the US Taurus World Stunt Awards for best action in a foreign film for their work in Kazakhfilm’s “Tomiris” in November 2020. The award has been delivered in Almaty, Kazakhfilm shared in a facebook post Jan. 22. 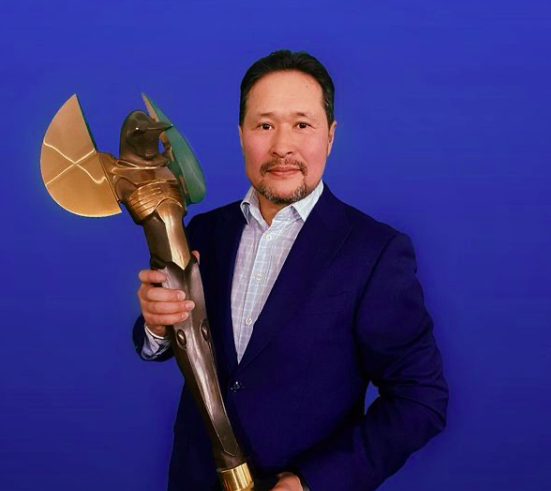 Immediately after receiving the long-awaited package, Kunguzhinov visited the film director, Akan Sataev, to share the joy of victory with him again. This massive award statuette weighs 12 kilograms and is very impressive.

“The long-awaited statuette, our first Taurus in the history of Kazakhstan and Central Asia, has finally come to us. Nomad Stunts now officially is one of the best stunt groups in the world,” the Nomad Stunts team shared in an instagram post.

“Today we received our award statuette for the best action in a foreign film. This is the most prestigious award, it is the equivalent of an Oscar award for stunt performers,” shared Kunguzhinov.

“This is a very historical moment, because this award has made it to Kazakhstan for the very first time. It is very pleasant to see it go to Kazakhfilm. This is the highest award for stuntmen and women,” said film director Akan Sataev.

Nomad Stunts is an international action company founded in 2000 by Kunguzhinov. It has established a reputation as one of the world’s best horse stunt performers capable of pulling off the hardest types of tricks. They have already collaborated with famous stars of world cinematography and leading studios on their projects.