Giorgio Armani changed the red carpet — and fashion —forever when Jodie Foster asked him to dress her for the 1992 Oscars.

Accepting her best actress award for “Silence of the Lambs” in a long line jacket and shimmering pants, Foster exuded a new kind of Hollywood power, and brought loads of publicity to Armani in the U.S. and around the world.

(Armani’s presence at the Oscars actually stretches back even further to 1978, when Diane Keaton accepted her best actress award in a very “Annie Hall”-looking windowpane check Armani jacket, which she paired with a long pleated skirt.)

It was that game-changing moment in the’90s that made designers and stars inseparable, locked in a mutually beneficial relationship that gave rise to the role of red carpet stylist, and fashion brands’ investment in entertainment industry relations, the godmother of that being Armani’s own Wanda McDaniel, who worked with Foster from Day One.

Even as this pandemic year’s awards season comes to a close with a return of a (partially) live Oscars ceremony on Sunday, some are questioning the future of the red carpet as a marketing tool and arbiter of style, especially when awards show ratings have reached historic lows this season for a number of possible reasons — digital format, esoteric nominated films, overly political speeches, shorter attention spans and shifting attention spans to shorter entertainment like TikTok among them.

But Hollywood’s king of the carpet is still a believer, even if Armani can garner equal if not more attention for the lotus flower day dress Meghan Markle wore for her bombshell TV interview with Oprah Winfrey. Here, the designer explains why:

WWD: There have been numerous reports about the declining viewership of awards shows, and how younger people don’t have an interest in them, or the movies that are nominated. Why does red carpet fashion still matter?

Giorgio Armani: Red carpet fashion still matters, in my view, as a moment of escape and dreaming, which is probably more relevant now than it ever was before. I am saying this from the perspective of a very pragmatic designer and entrepreneur. I understand a momentary lack of interest now that things have gone virtual, but it will matter again, and actually it already does. 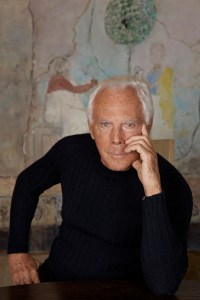 WWD: Have you pulled back any resources from Hollywood or the red carpet this year, since the awards shows have been held remotely and over Zoom?

G.A.: Yes I have, not least because there have been fewer requests. On top of this, and more meaningfully, we are adopting a sustainable, do-more-with-less approach even to red carpet dressing, reusing a few styles instead of throwing them away after one outing, with an enormous waste of skills and resources. My creations are timeless, and can be worn on many occasions.

And I am pleased that the celebrities I have involved have enthusiastically embraced this initiative. Cate Blanchett, for instance, has worn the same dresses on more than one occasion. And in December, for the opening night of La Scala in Milan, numerous artists performed in clothes that were previously worn, but no less impressive. This is a very important aspect for me: having a conscience matters, even at the peak of glamour.

WWD:  Speaking as specifically as possible, what brand benefit do you see from dressing celebrities at the Oscars? Is it about dollars and cents or prestige and dreams?

G.A.: It is about prestige and dreams, but those lead to dollars and cents. What I am saying is that red carpet exposure does not entice the commercial success of a certain item not lastly because for the red carpet we produce special bespoke or couture pieces. But the red carpet builds a popular aura: something intangible and difficult to define that nonetheless augments the prestige and gravitational pull of the brand. This said, today social media has far more impact on revenues and the success of specific pieces than ever before, even for a timelessly elegant label like mine.

WWD: Forget ABC, maybe the Oscars should move to IGTV!