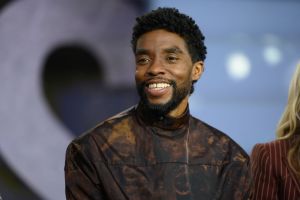 Last Sunday (April 25), the 93rd annual Academy Awards was held at Union Station in Los Angeles. And while many wondered why viewers choked up when Chadwick Boseman‘s likeness appeared during the customary “In Memoriam” segment, some were upset that King T’Challa didn’t win the “Best Actor” award that night.

Millions of Boseman fans felt the late-great actor was deserving of the award for his role as Levee Green in Ma’s Rainy Black Bottom, but ultimately the Oscar went to Anthony Hopkins for his role in The Father.

Though fans were upset at the end result, TMZ is reporting that Boseman’s family are actually okay with Hopkins taking home the gold. Taking the high road in the matter, Chadwick’s brother, Derrick says that at the end of the day, every actor nominated was worthy of taking home the award. He even revealed that whenever Chadwick would talk about Oscar awards he’d “always described them to me as a campaign.”

He says the family isn’t upset or agitated whatsoever that Chadwick’s name wasn’t called at the end of the Oscars ceremony.

What’s more … Derrick tells us the family wishes Hopkins and his family all the best because, as Derrick put it, “I”m sure [Anthony] would if Chad won.” Don’t forget … after AH won the award for his role in ‘The Father’ his gracious message included a shout-out to Chadwick.

Now we wait and see how Ryan Coogler will address King T’Challa’s absence in the highly anticipated Black Panther 2 after reassuring everyone that using a CGI Chadwick was off the table. Will Michael B. Jordan’s Killmonger ascend to the throne? Will Letitia Wright’s Suri take up the mantle like in the comic books? We’ll have to wait and see.

Our staff has picked their favorite stations, take a listen…