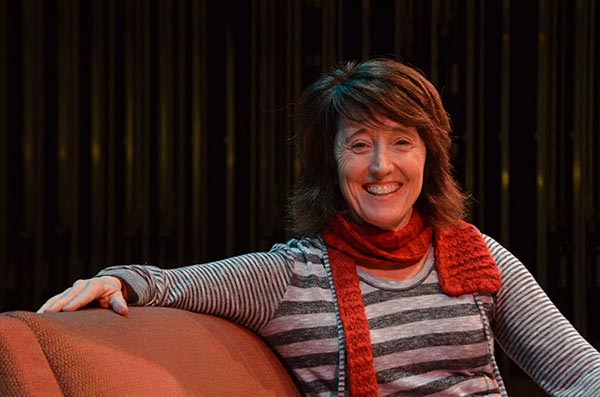 (HACKETTSTOWN, NJ) — Centenary Stage Company’s rescheduled 2020 Women Playwrights Series closes on Wednesday, November 18 at 7:30pm with I’ll Give You Something to Cry About by Patricia Cotter.  The presentation will be held in the Kutz Theatre of the Lackland Performing Arts Center at 715 Grand Ave. Hackettstown, NJ.  Admission is by donation and advance reservations require a $5.00 minimum donation.

Paulette and Ann Marie are sisters – they share some DNA a brutal sense of humor and that’s about it.  So what happens when Paulette shows up unannounced to Ann Marie’s San Francisco apartment?  “I’ll Give You Something to Cry About” is a ruthless comedy that investigates the meaning of family, responsibility and the power of letting go.

Due to COVID-19 restrictions and social distancing guidelines required by the State of New Jersey, seating is limited and advance reservation is strongly recommended.  To reserve call the Centenary Stage Company box office at (908) 979 – 0900 or visit centenarystageco.org.

Critically acclaimed and award-winning playwright, Patricia Cotter holds accolades including; American Academy of Arts Letters, Richard Rodgers Award, Emmy Award, Writers Guild of America Award, Plays include:  1980 (Or Why I’m Voting For John Anderson) Chicago’s Jackalope Theatre 2017, Jeff Awards nominee for Best New Play, The Surrogate, winner of the 2016 Susan Glaspell Award, finalist at the 2016 O’Neill National Playwrights Conference, produced at Centenary Stage Company, NJ, in 2017.  Rules of Comedy, produced in 2015 Humana Festival of Ten-Minute Plays.  The Stars Look Very Different Today was produced as part of Theatreworks 17th Annual New Works Festival, 2018.  Drinking on A Plane in 2018, and The Anthropology Section in 2015 both produced by The Actors Theatre of Louisville’s The Tens, The Break Up Notebook (a GLAAD Award nominee).

Musicals (librettist/adaptations) include Rocket Science: A Musical, received readings at Playwrights Horizons in New York (directed by Kathleen Marshall) and was produced at The Village Theatre, Seattle; The Break-Up Notebook: A Musical (based on her play), at The Vineyard Theatre in New York.  She was asked by Disney Theatricals and MTI to write Mulan, Jr. (based on the Disney film Mulan), which is produced and performed nationally.  Patricia adapted The Surrogate for Kanbar Entertainment and the film is slated for a 2020 release.  Patricia’s most recent play; After All I Did For You was commissioned from Theatre Lab at FAU as part of their Fair Play Initiative with a reading scheduled for October 2019.  She is in residence as a playwright at the Playwrights Foundation in San Francisco.  In addition to writing for the stage, Patricia has written for Twentieth Century Fox Television, Disney Theatrical, and Comedy Central.

Led by program director Catherine Rust and now in its 29th year, the Women Playwrights Series provides a working platform for the under-served voices of women writing for the theatre, CSC’s Women Playwrights Series (WPS) has now featured and developed the new work of over 60 playwrights from around the country, and produced fifteen world premiere productions from works developed in the series.  Plays selected for the WPS receive rehearsal with a professional cast and director, providing an opportunity for the playwright to collaborate with other industry professionals during the development process.  They are presented script-in-hand in staged readings for audiences, which affords the playwright further opportunity to develop the work.  Plays presented in the WPS program are finalists in the Susan Glaspell Award Competition, and are under consideration for full production in the subsequent season at the Centenary Stage Company.

Centenary Stage Company remains committed to the health and safety of our community and adheres to all requirements and guidelines mandated by the State of New Jersey including, but not limited to; observing social distancing, limiting total capacity, and requiring masks or facial coverings.  For more information regarding CSC COVID-19 policies visit, centenarystageco.org/faq.