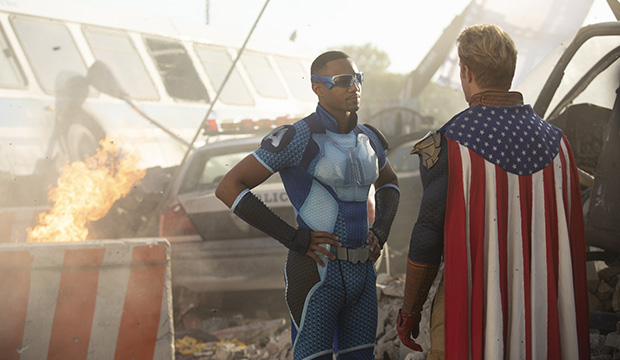 Fans of subversive genre shows have high hopes for Amazon Prime’s anti-superhero series “The Boys” at this year’s Emmys. The gruesome and violent but often very funny series, which was adapted for TV by Eric Kripke (“Supernatural”) and is based on the Garth Ennis and Darick Robertson comic book of the same name, has been well received by critics and viewers alike. Starring Karl Urban, Jack Quaid, Erin Moriarty and Antony Starr, “The Boys” imagines a world in which super-powered individuals like Moriarty’s Starlight and Starr’s Homelander are controlled, marketed and exploited by a powerful corporation while many aren’t even the benevolent heroes they’re depicted to be in the media.

The show’s eight-episode second season debuted all the way back in September, meaning it’s not necessarily the freshest show in Emmy voters’ minds. But the path that it has taken to this point is not unlike that of FX’s absurd vampire mockumentary “What We Do in the Shadows,” another beloved genre show that bucked tropes and found success at the Emmys.

Created by Jemaine Clement and Taika Waititi and based on their cult film of the same name, the wildly funny comedy about vampires living together on Staten Island received multiple craft Emmy nominations for its first season, which aired in 2019. It snagged a Writers Guild of America Award nomination for Best New Series and followed that up with an excellent second season in 2020, en route to nabbing a rare three Emmy nominations for writing as well as a bid for Best Comedy Series. For its first season, “The Boys” also received a craft nomination (sound editing) before scoring a WGA nomination for Best Drama Series for its second outing. This leads many to wonder if the show might be able to similarly sneak into the drama writing race at the Emmys too. And if so, perhaps the strength of “The Boys’” writing support can similarly carry the show to a nomination for Best Drama Series. After all, the two nominations often go hand in hand, with the writing winner also often, but not always, lining up with the series winner.

As anyone with even rudimentary knowledge of the Emmys could probably tell you, genre shows have traditionally struggled to be recognized by voters. But in the wake of the massive success of HBO’s “Game of Thrones,” the doors seem to be (slowly) opening to include more shows that don’t fit firmly within traditional boxes. The fact both “What We Do in the Shadows” and “The Mandalorian,” a sci-fi Western set within the “Star Wars” universe, over-performed and received recognition in series races last year does bode well for a show like “The Boys,” though the latter did also receive a few acting noms (guest for Giancarlo Esposito, who is on “The Boys,” and voiceover for Waititi) while the former received none. Like “What We Do in the Shadows,” “The Boys” isn’t likely to sneak into any of the acting races and currently isn’t predicted to do so despite the fact that the fields are less competitive than usual, which could make a drama bid a bit more difficult but also only adds to the growing list of similarities between it and “What We Do in the Shadows.”

Of course, “The Boys” isn’t the only superhero-related series contending for a spot in the Best Drama Series lineup this year. Marvel’s traditional superhero series “The Falcon and The Winter Soldier” is also eligible, and, like its fellow Disney+ show “The Mandalorian,” also has a massive built-in fan base that could give it a boost among Emmy voters who might vote based on name recognition. It seems unlikely they’ll go for both superhero-related shows, but “The Boys” is currently leading in the odds between the two (“The Falcon and The Winter Soldier” is in 11th place). With the strength of its writing, a unique story and visual style that sets it apart from the rest of the pack, and that all-important WGA nomination in its pocket, “The Boys” certainly seems like it has the edge going into nomination voting.