It’s a rare occurrence: An Academy Award statuette is up for auction and bids started at $1,000. 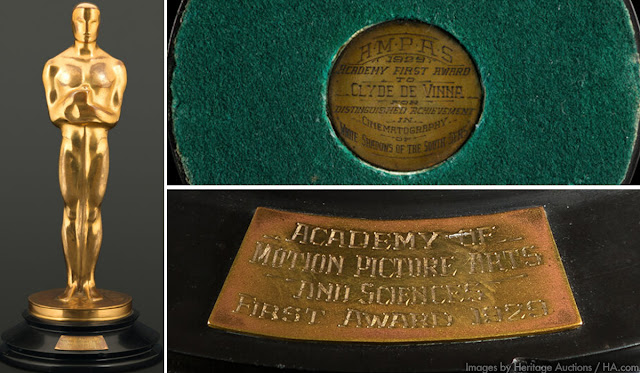 One of the first Academy Award statuettes is up for auction.
For those looking to own an official Oscar, look no further than Heritage Auctions Lot #86277, part of the Treasures of the Silent Screen Movie Posters Signature Auction #7276.

“Without a doubt, this is an incredible opportunity to own one of the earliest examples of this instantly recognizable prize and one of extremely few Oscars ever made available to the public,” the description reads on the auction website. “This will almost certainly be the centerpiece of its new owner’s collection.” 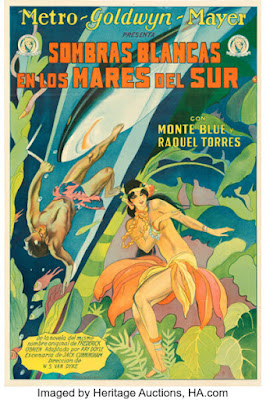 The Academy Award statuette up for auction was given to cinematographer Clyde De Vinna at the 2nd Academy Awards ceremony on April 3, 1930 — for achievements in 1928/1929 — for his work on the silent film “White Shadows in the South Seas.”

His Oscar was the only award for the romantic adventure. That year, the “Outstanding Picture” award went to MGM’s “The Broadway Melody.”
The Argentinean poster for the film (pictured) is also available for auction. “This wonderful poster features artwork of barely clad Raquel Torres and another member of her character’s tribe swimming through the sea,” the description reads on the auction website.
De Vinna was cinematographer on more than 120 film and television projects from 1916 through 1953. Some of his notable work includes “The Three Muskateers” (1916), “Unfatihful” (1918), “Blindfolded” (1918), “Adele” (1919), “The Wild Party” (1923), “Shipmates” (1931), “Unseen Guardians” (1939) and “Within These Walls” (1945).
De Vinna became a cinematographer in 1915, at the very beginnings of the film business. According to IMDB, he didn’t care for studio-shot pictures and preferred films that were to be shot on location.
“White Shadows in the South Seas” was filmed on location in Tahiti.
About the statuette

This vintage statuette stands 12 inches tall with the cast metal, gold-plated figure measuring 3.5 inches wide by 10.25 inches tall. The beveled black base is 5.5 inches round at the bottom, tapered to 4 inches, where the base attaches to the film reel that forms the integral foot of the metal statue.

Sculptor George Stanley (who also fashioned the famous Muse Fountain at the Hollywood Bowl) sculpted Cedric Gibbons’ original design in clay and Sachin Smith cast the statuette in 92.5% tin and 7.5% copper.
A final coating of gold plate gives the trophy its iconic lustre. The original Oscar mold was cast in 1928 at the C.W. Shumway & Sons Foundry in Batavia, Illinois.
A 1.25 x 1 in. cast metal plaque reads “Academy of Motion Picture Arts and Sciences First Award 1929” and is affixed to the front of the base. Embedded in the bottom of the base is a 1.75-inch round engraved gold-plated disc, which reads, “AMPAS 1929 Academy First Award to Clyde De Vinna for Distinguished Achievement in Cinematography of White Shadows of the South Seas.”
Heritage Auctions opened proxy bidding around June 20 and the golden statuette’s first bids were just over $1,000. As of June 29, and after around seven bids, the current bid is at $52,500 (with an added “Buyer’s Premium” of 20% added), for a total of $63,000.
Proxy bidding is set to close on Friday, July 15, with actual auction dates set for July 15 and 16 in Dallas.
A rare occurrence
Buying an Oscar is a rare occurrence since an Academy rule created in 1950 requires winners to sign an agreement stating they will not sell an Oscar without first offering to sell it back to The Academy for $1.
Steven Spielberg is also known to buy pre-1950 statuettes and donate them back to The Academy.
In July of 2001, Spielberg purchased Bette Davis’ Best Actress Oscar for $578,000 at the auction house Christie’s. Davis won the statuette for her role in 1938’s “Jezebel” and the golden Oscar was valued between $150,000 and $200,000. Spielberg planned to give the Oscar back to The Academy, which is what he did after purchasing Clark Gable’s Best Actor Oscar for “It Happened One Night” for $607,500 in 1996.
Fun fact: Legend has it that Davis, who died in 1987, coined the term “Oscar” for the Academy Award after she said that its bottom resembled that of her husband, Harmon Oscar Nelson.
A 1936 Academy Award auctioned in 2019 by LiveAuctioneers was part of a collection of the late Turner Classic Movies host Robert Osborne.
The last Oscar we saw go up for sale by Heritage Auctions was in 2011. An unidentified buyer bid $89,625.00 for an 1942 Oscar statuette, awarded for Best Sound Recording to Nathan Levinson for “Yankee Doodle Dandy.”
The 95th Academy Awards, for outstanding film achievements of 2022, will be presented on Sunday, March 12, 2023, at the Dolby Theatre at Ovation Hollywood (formerly Hollywood & Highland Center), and will be televised live on ABC and in more than 225 countries worldwide.
FREE READ - Alan Nafzger's TV Drama - The Roosevelt Hotel
Tags: Academy Awards Oscar Night Oscar Nite Oscar Winner the Oscar Who will win an Oscar Award